The classical music world seems to be obsessed with youth. We’ve all heard of how young little Mozart was when he wrote his first symphony — OK fine, he was 8-years-old (and interestingly enough, the last movement of his final symphony written 24 years later uses the same theme as this very first symphony’s second movement.) We’ve heard of 9-year-old Prokofiev’s opera, “The Giant.” If you turn on the radio or TV, you’re likely to hear the angelic voice of Jackie Evancho who took second place on “America’s Got Talent” at the age of 10 with her operatic style singing. You also may have heard of little Julie Andrews who began singing professionally at the age of 12 in London. There is Erich Wolfgang Korngold who began composing at the age of 10 and then went on to write some incredible 20th-century classical music and memorable music in the golden age of cinema (“Captain Blood,” “The Adventures of Robin Hood,” “The Sea Hawk.”) And you can’t turn on PBS without seeing 32-year-old Venezuelan Gustavo Dudamel shaking his hair, I mean baton, in front of the Los Angeles Philharmonic.

But the thing is, there is a whole other batch of composers who began composing, or continued composing when they were very, very old. Austrian composer Anton Bruckner (1824-1896) is well known for a symphonic style that seems to create worlds (some would argue they never seem to end, the 8th symphony checking in at more than 100 minutes.) It wouldn’t be until 1868 when the composer was midway through his 40s that his first symphony was premiered. The Czech composer Leos Janáček (1854-1928) composed at an early age, but did not find any success until the age of 62 when the opera “Jenůfa” premiered. In both of these composers’ cases, a burst of inspiration came from an outside source. Bruckner was moved when he heard a Wagner opera in 1863 (I guess not that moved since it still took five years until the premiere of the symphony) and Janáček, like all good artists, was inspired by love, or love unrequited (see Berlioz for a similar effect.)

It seems though, that once some composers get started, they can’t stop. Joaquin Rodrigo, famous for his “Fantasía para un gentilhombre,” wrote his final work at the whipper-snapping age of 97. The great Italian-American composer Giancarlo Menotti wrote his final score at 95. Aaron Copland lived to be 90, although his compositional output deteriorated in the last decade of his life due to Alzheimer’s. Igor Stravinsky was 88 when he died, as was the great American composer Roger Sessions. Carl Orff, of “Carmina Burana” fame, was 87 at the time of his death due to old age. Last, but certainly not least, great American composer Elliott Carter wrote his final piece just months before his death last November at the age of 103. Amazingly in Mr. Carter’s case, his works written in his 80s and 90s are considered to be some of his strongest. 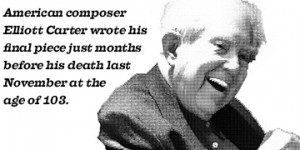 As I turned 30 this year, and instantly felt my youth scamper away, my respect and admiration began to slide from that first batch of prodigies to the later batch of tried and true oldies but goodies. I suppose that once I’m gone from this world my attention will shift to composers who didn’t find fame or fortune until well after their deaths, but that’s another story. Here’s to youth… or old age! 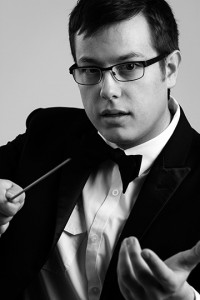 Creativity held no boundaries Feb. 1 as science and art students came together in research. BY: HEATHER REINBLATT In its eighth year of fruition, the University of Florida Howard Hughes Medical Institute […] Read more »

Hello there, my name is Aaron Behner. I’m a professional bartender and recent transplant to the Gainesville area. I have worked in all manner of bars and drinking establishments in […] Read more »

The classical music world seems to be obsessed with youth. We’ve all heard of how young little Mozart was when he wrote his first symphony — OK fine, he was […] Read more »

The fun, fabulous and functional features of Fresh Pastry Stand, an Etsy store, come from the creative, joy-filled mind of the vintage genie herself, Deva Mirel. After greeting us with […] Read more »

Gary Mullen and The Works will perform “One Night of Queen” at University of Florida Performing Arts on March 30. Below, Gary Mullen shares his connection with Queen’s late […] Read more »