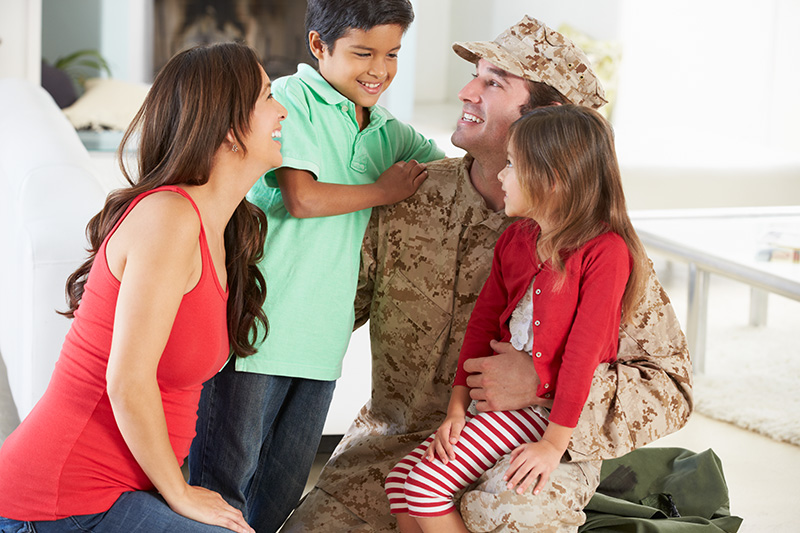 Set to open its doors in November, the North Florida South Georgia Fisher House for regional veterans will serve 50 counties and provide free housing for the family members of local veterans.

When retired U.S. Army Captain Jonathan Pruden returned home from Iraq severely injured, he was immediately taken to the Walter Reed National Military Medical Center, located in Maryland. While physicians tended to his injuries, another organization cared for his wife, Amy.

Pruden said that when he was injured in Iraq, it wasn’t heaven or hell he was concerned about and his life did not flash before his eyes. Instead, he was worried about never getting to see his wife again.

With no time to prep and plan, Amy left her home and job and drove to be by her husband’s side. Finding a hotel was the last thing on her mind, and because the Fisher House was located on the medical center’s campus, her husband could be her first and only priority.

By staying right on the hospital’s grounds, she did not need to worry about bus schedules and transportation. When John woke up at 2 a.m. in pain and needed someone to hold his hand, she was able to be there with him.

This experience has led Pruden, the executive director of the Wounded Warrior Project of Jacksonville, an organization dedicated to supporting veterans, to advocate for the North Florida South Georgia Fisher House for regional veterans.

Since 1991, the U.S. Fisher House Foundation has provided homes on the grounds of major military and VA medical centers in the U.S. and Europe. The homes, which are donated to the military and Department of Veterans Affairs, provide boarding for the family members of veterans. In November, Gainesville will open the doors of its very own Fisher House, located on the Malcom Randall VA Medical Center’s grounds.

“The Fisher House is important because it is a home away from home,” Pruden said. “It is a place where families don’t have to worry about the bills, transportation. It’s a remarkable resource.”

Fisher Houses are founded upon patriotism and an immense gratitude for America’s troops and their loved ones. It provides families, who are undergoing similar situations, with the opportunity to mourn, bond, cope, heal, and grow together.

While these families have been united under the worst of circumstances, Pruden said that because such a small percentage of Americans have served in Iraq and Afghanistan compared to past wars, such as the Vietnam War, Fisher Houses can bring veterans and their families together.

The Fisher House provides a place where they can gather and be that resource for one another,” Pruden said. “It’s probably the best medicine you can get sometimes, especially for your soul.”

While Gainesville’s Fisher House will surely be an instant asset to the community, it has been more than eight years in the making. When Rick Fabiani, a member of the Rotary Club of Gainesville, decided that he wanted to do something meaningful for local veterans, he and his wife, Patti, and their team of rotary members discovered the Fisher House Foundation.

When Patti and her husband contacted the Department of Veterans Affairs and discovered that a Fisher House for Gainesville would be far down on the list for future homes, they decided to be even more proactive.

Rick and Patti, along with then rest of their team, wrote letters to all of Florida and Georgia’s U.S. representatives and senators to increase support and build awareness. After receiving an incredible $1 million donation from a local family foundation, the future of Gainesville’s very own Fisher House was secured.

“The ability for the military to keep people alive in conflict is extremely high, so the amount of veterans returning from Iraq and Afghanistan that have lifelong disabilities is tremendous,” Patti added. “It’s a huge obligation that our country has towards them.”

But the country is embracing this obligation. Denzel Washington, Kevin Bacon, Bruce Willis, Anthony Hopkins and Morgan Freeman are among the celebrities who have contributed to the cause.

The doors have not even opened and more than 45 local organizations have committed to providing dinner each Thursday at the house. Patti said that even after the house is completed, the Gainesville Fisher House Foundation will still actively fundraise in the community to support the home and its guests.

While the community’s contributions have already been tremendous, Patti said that there are many different ways to get involved. Although there is a small fulltime staff, volunteers will always be needed. Many families will be traveling with young children and will need daycare or babysitters. Monetary donations are welcome, but because guests will often be leaving their homes quickly and with little to no personal belongings, towels, bathrobes, books and other items will be needed. The Fisher House will also provide Publix, Target and gas gift cards for families.

The Fisher House will be much more than a boarding facility. In addition to a therapeutic Healing Garden, designed by the University of Florida’s Department of Landscape Architecture, there will also be a Walk of Courage, a pathway going from the Fisher House to the hospital with bricks featuring words of encouragement. The path will also serve as a memorial. An outdoor kitchen was also donated to the home, as well as a children’s playground that can be used for different purposes.

While guests are expected to keep their rooms clean, they will live at the home free-of-charge. The average stay at a fisher house is about 10 days, but guests have stayed for up to two years. There will be birthdays, weddings, baptisms, bar and bat mitzvahs, funerals and much more at the North Florida South Georgia Fisher House for regional veterans.

For more information about the North Florida South Georgia Fisher House for regional veterans and how to help, visit http://www.gainesvillefisherhouse.org/.